The Realme Narzo 50A Prime is built around a 6.6″ FullHD+ LCD with a notch for the 8MP selfie camera. The back panel of the smartphone has a kevlar-like texture and houses a rectangular island housing a flash and a 50MP primary camera joined by the depth and macro units. Realme hasn’t revealed the resolutions of the last two but says the former has an f/2.8 aperture and the latter has an f/2.4 aperture.

The Narzo 50A Prime is powered by the Unisoc T612 SoC with 4GB RAM, runs Android 11-based Realme UI R Edition out of the box, and offers two storage options—64GB and 128GB—as well as a dedicated microSD card slot for storage expansion up to 1TB.

The Narzo 50A Prime is 8.1mm thick and has a side-mounted fingerprint scanner for biometric verification, as well as a 5,000 mAh battery that can be charged at up to 18W through a USB-C connector.

All of this may sound familiar because the Realme Narzo 50A Prime is a rebranded version of the Realme C35 with a different processor and a slightly different rear panel design. 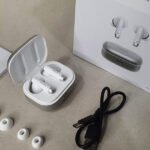